The 40-day IT Challenge Went Around the World

Taking a journey around the world within 40 days at the time of closed borders due to coronavirus is possible only virtually. Software companies from Žilina associated in an IT cluster called Z@ict, which also includes Scheidt & Bachmann Slovensko, found an original solution. With the IT challenge, they supported the physique goals of their employees and they also helped to have a good thing going.

The 40-day challenge kicked off on 12th June 2020. The goal was clear – to go around the whole world from Žilina within 40 days! Each sports activity was allowed, but the six most popular sports of Žilina´s IT employees showed up with time – cycling, running, hiking, skating, scootering and swimming. The participation was voluntary. All you had to do was to register on the Z@ict website and report the number of kilometers to chatbot called “Ayti“ after each sports activity. The campaign also had a charitable dimension – collecting € 4,000 to buy a new car for the children's crisis center – Náruč („Arms” in English).

"The sport challenge ended 22nd July 2020. During that time, all involved  – more than 400 activists - managed to cover a distance of 51,721 km on their own, which is 29 % more than we expected. In addition, we managed to do one whole turn of the Earth plus we came from Slovakia to Southeast Asia or South America," say the organizers of the challenge. Participants from Scheidt & Bachmann Slovensko helped a little, too  – they contributed with 2,426 km. The charitable goal of the project was also achieved. Thanks to the collection, the children´s crisis center was finally able to afford to buy a new car, that helps them in their daily work.

Z@ict(IT kraj) – an association of IT companies (IT cluster) of the Žilina region, which develop the IT community to grow both in quality and quantity. It was established in 2008 and today has 17 members. Its chairman is our colleague Marián Koprda, head of the Parking Solutions as a representative of Scheidt & Bachmann Slovensko, which employ the most IT specialists in Žilina. More info: www.itkraj.sk. 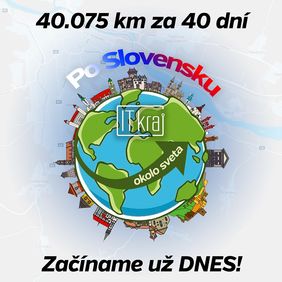