Scheidt & Bachmann Slovensko became a member of the Slovak Chamber of Commerce and Industry (SOPK) at the beginning of 2019 and immediately triumphed.

SOPK associates the most important domestic and foreign companies operating in Slovakia. Since 2002, the Chamber has been organizing a competition to reward companies for respecting ethics in the business. “The SOPK´s Grand Prize is an opportunity to show the business partners and public that business in Slovakia can be done fairly and correctly. It is an award for those who are reliable business partners, who have the trust of their employees, customers and the public,” says Peter Mihók, Chairman of SOPK.

Scheidt & Bachmann Slovensko prepared a detailed report about its history, activities, products, company philosophy, benefits for employees and customer services. Even though the company sent an application form on the last possible day, it brought success in the end. The jury selected two winners of the SOPK´s Grand Prize from the participating companies and 18 companies, including Scheidt & Bachmann, received the Certificate of Merit. Peter Lazar, Managing Director of Scheidt & Bachmann Slovensko received the Certificate during ceremony from Peter Mihók, Chairman of the SOPK and Richard Raši, the Deputy of Prime Minister of the Slovak Republic for Investments and Informatization. “We are highly honored to receive the Certificate for respecting ethical principles in business competition. It shows that we are a company in which the ethics is absorbed in all our activities”, says Peter Lazar. 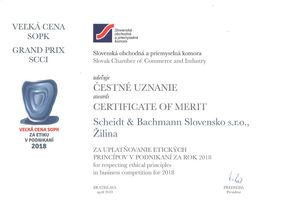