Our cyclists are the 10th best in Slovakia

In Slovakia, May is the month of the nationwide competition Bike to Work. Cyclists from Scheidt & Bachmann Slovensko finished with new records this year, even though the weather literally placed obstacles in their bicycle´s wheels.

There were 18 rainy days during 22 competition and working days, and the average daily temperature was 15 °C. Bad weather was the main reason why Slovak colleagues failed to ride more kilometres than last year, although 103 our colleagues took part in the competition. There were students, employees of the production, quality and HR departments or developers in our racing peloton. Even the Managing Director – Ing. Ján Krúpa – was a role model for the rest of the non-cycling employees. Despite of the difficult conditions they did not give up and fought bravely. Finally, they managed to cycle up to 6,885 km, save almost 2 tons of CO2 and finished in an amazing 10th place among the registered Slovak companies. Our colleagues ended up in the ranking after employees of post, railways, ministries and the largest Slovak university.

Cycling team in town Bytča was created for the first time and it managed to finish in a nice 3rd place (52 rides, 288 km) in this town. Cyclists from the Bratislava office completed 172 rides and passed 1,832 km. Up to 796 km of them were biked by Tomáš Benč – the best cyclist in this year. The Bratislava cyclists took 41st place in strong competition. The colleagues from Žilina were the most successful. Together they passed 4,766 km in 1,234 rides and finally triumphed in Žilina. For the first time in history, they have overtaken their biggest competitor – company KIA - and enjoyed the desired victory. Many colleagues admit that the desire to win had been the driving force for them to take a bike ride to work, although it meant they would come wet and frozen. They even set up a group on Facebook, where they encouraged themselves and shared their bike experiences. For example, Braňo Lulek, software developer in the Parking Solutions division, came across a herd of boars on the way from work, but he did not get discouraged from biking.

The cyclists celebrated their success with a cycling breakfast. Every participant got a diploma and everyone who had taken more than 30 km by bike was included in the draw and three of them won the practical prizes. In the end they took a traditional photo in campaign T-shirts under the company logo.
This year's contest Bike to Work was also exceptional for our company, because we became a partner of the whole project and we financially supported the organizer, non-profit organisation Občianska cykloiniciatíva Banská Bystrica (Community Cycle Initiative). “We care about the environment. We also can contribute to the development of cycling in Slovakia and encourage as many of our employees as possible to travel to and from work in an environmentally friendly way,” says Ing. Róbert Kulla, Managing Director of Scheidt & Bachmann Slovensko, s.r.o.

Results of Scheidt & Bachmann Slovensko in the Bike to Work competition 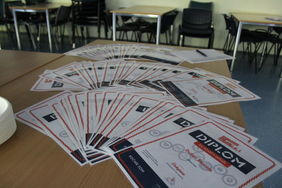